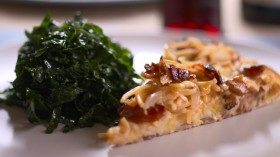 Here’s how to turn your leftover pasta into a new meal in the form of an Italian omelet. You can bulk it up with just about anything kicking around in the fridge—including leftover vegetables, meat, and poultry. If you have one of those great old cast-iron skillets, use it for this dish. Then you can bring the skillet to the table and serve your frittata family-style. Serve with a tossed green salad and crusty bread.

Bring a medium pot of salted water to a boil over high heat. Preheat the broiler to high. Spread the walnuts on a rimmed baking sheet and place under the broiler, about 5 inches from the heat source, until they just begin to brown, 2 minutes.

Add the spaghetti to the boiling water and cook until just al dente, 8 to 10 minutes. Drain well.
Meanwhile, cook the bacon in a large, heavy, ovenproof skillet over medium heat until crisp, about 6 minutes. Transfer the bacon with a slotted spoon to paper towels to drain, leaving the fat in the pan. Add the onion and cook, stirring occasionally, until softened, about 5 minutes.
Combine the eggs with the cooked spaghetti, the Brie, bacon, walnuts, 1 teaspoon salt, and the pepper. Remove the onion from the skillet with tongs and stir it into the spaghetti and egg mixture.

Add the oil to the drippings in the skillet and heat over medium heat. Pour the spaghetti and egg mixture into the pan and cook until the frittata is almost set in the center, about 5 minutes. Broil the frittata just until the top is lightly browned and the center has set, 2 to 3 minutes.

In a large bowl massage the kale with your hands for 4 to 5 minutes or until it has become shiny and a little translucent and reduced in volume by one third to one half. Add the olive oil, lemon juice and salt and pepper to taste and toss well.

My favorite brand of bacon is Niman Ranch.