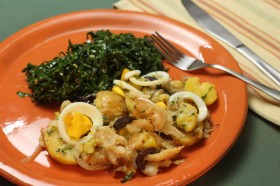 Rinse the salt cod in cold water and place inside a large container. Fill with water, about 2½ gallons (the volume of water should be 10 to 15 times the size of the cod). Store in the refrigerator to soak and de-salt for 2 days, changing the water at least 3 times per day. It is very important to de-salt the cod properly; otherwise the dish will taste too salty.

Remove the fish from the water and place in a medium-sized saucepan (you can cut the fish to fit the pan). Cover the fish with cold milk. Bring to a boil then reduce the heat to low and cook, uncovered, until it becomes opaque, about 15 minutes. Turn the heat off and let the cod rest in the milk for at least 20 minutes, uncovered. Using a slotted spoon, remove the cod and discard the milk (or save for the sauce). Flake the fish with your hands into small chunks, or place in a food processor, using the pulse mode, for just a few seconds, being careful not to shred too much (you can keep the shredded cod for up to 6 hours before using).

Place the whole potatoes in a large heavy saucepan; cover with cold water by at least an inch; add a large pinch of salt and bring to a boil. Reduce the heat to medium, and simmer until they are fork-tender, about 12 to 15 minutes. Drain in a colander and spread them onto a plate. When they are cool enough to handle, peel and slice the potatoes into ¼ inch thick. Set aside.

Place 3 tablespoons of olive oil in a large skillet and cook the onions over low heat, stirring occasionally until they are tender, sweet, and translucent, about 10 to 15 minutes. Resist the temptation to use high heat, or they will brown.

In a bowl mix the cod, onions, and potatoes. Mix in about one cup of the olive oil and parsley. Taste; you might need some pepper but not a lot of salt.

Assemble the dish: Preheat the oven to 350˚F. Spread the mixture evenly across the dish. Drizzle the remaining 1cup olive oil on top. Bake in the oven until the dish is bubbling hot, about 15-20 minutes. Remove the dish from the oven, spread the eggs and olives all over and return the dish to the oven for another 10 minutes. Serve hot.

COOKS NOTES:
from “The Brazilian Kitchen”
Glossary of Brazilian Ingredients used in this episode:
Dende Oil
This oil is the mainstay of Bahian Cuisine, and is the product extracted from the dende palm tree, which was brought to Brazil by African slaves, back in the 17th century. The fruit and the pit are used in two different ways. The dende oil used in cooking is extracted from the fruit pulp; first it is cooked in steam, then it is dried completely in the sun. The fruit is then crushed to release its bright orange-red oil. The pit is also used to extract oil of a different kind, with a transparent color, mostly used for cosmetics for its similiarity to cocoa butter.
Yucca
A.k.a manioc or cassava, earthier tasting than a potato and richer in starch, this vegetable is one of the foundatons of Brazilian cooking. It comes from a perennial shrub with its origins in the Amazon. The plant’s long roots grow in clusters and are covered in a thick, shiny brown skin, and a thick white layer. When cut off, the outer layers reveal a snow white, firm interior with grey or purple veins. For home use, yucca is mostly boiled or fried and becomes very creamy with a mellow taste.
Salt Cod
Salt cod arrived on the Brazilian table through our colonizers, and today Brazil is the biggest consumer of salt cod followed by Portugal, Spain and Italy. Brazil however, is not a producer – all of our products are imported from Norway and Portugal. When using salt cod, it’s very important to desalt it properly: Use a big plastic container as the volume of water has to be at least 10 times bigger than the weight of the cod. I also like to use a rack or colander so that the cod is floating completely in the water. Try to find cod that has thick flesh.
Cachaca
Cachaca is a distilled beverage from Brazil, as important to the country as vodka is to Russia and tequila is to Mexico. Essentially it is an aguardente – a spirit distilled from fruits or vegetables – in this case, the juices of the sugarcane. There are many different kinds of wood (oak, cherry, and jequitba rosa among them) used for aging the spirit, each leaving different traces of taste – some with a more floral flavor, others with a hint of vanilla or cinnamon.

One Response to Salt Cod with Onions, Eggs Potatoes and Olives