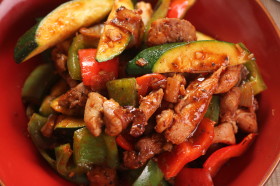 Serves 3 as a main dish with rice, or 4 as part of a multi-course meal

2. Heat a 14-inch flat-bottomed wok over high heat until a bead of water vaporizes within 1 to 2 seconds of contact. Swirl in the remaining 1 tablespoon of oil, add the onion, then, using a metal spatula, stir-fry 30 seconds or until the onions begins to wilt. Push the onions to the sides of the wok, carefully add the chicken and spread it evenly in one layer in the wok. Cook undisturbed for 1 minute, letting the chicken begin to sear. Stir-fry 30 seconds or until the chicken is almost completely opaque. Add the ginger, garlic, and the paprika mixture, and stir-fry 1 minute or until the aromatics are fragrant and the chicken is well coated in the spices.

3. Add the red and green bell peppers, reduce the heat to medium and stir-fry 2 minutes or until the peppers begin to soften. Do not be alarmed if the spices stick a little to the bottom of the wok. Add the fish sauce, chilies, zucchini, and the remaining 1/4 teaspoon salt, and stir-fry 1 minute or until almost all of the liquid has evaporated.

4. Re-stir the cornstarch mixture, swirl it into the wok, increase the heat to high, and stir-fry 1 minute or until the chicken is just done and the vegetables are crisp-tender. Remove the wok from the heat and stir in the chili powder. Serves 3 as a main dish with rice or 4 as part of a multi-course meal.

How to season a wok:

2 tablespoons peanut or vegetable oil
1 bunch of scallions cut into 3-inch pieces (Make sure scallions are not wet. Any moisture will cause the spattering when added to the wok.
1/2 cup unpeeled sliced ginger

1. Thoroughly wash the inside and outside of a carbon-steel wok with liquid dishwashing soap and hot water using a stainless steel scrubber. This should take quite awhile; there is a coating on the new wok that needs to be removed. Rinse with hot water. Dry the wok thoroughly with paper towels then place over low heat for 1 to 2 minutes to make sure the pan is totally dry.

2. Open the window and turn the exhaust fan on high speed. Heat the wok over high heat until a bead of water vaporizes within 1 to 2 seconds of contact. The bottom of the pan may turn color. Swirl in the oil and add the scallions and ginger. Reduce heat to medium and stir-fry 20 minutes, using a spatula to push the mixture up the sides of the wok to the edge.

Do not be alarmed if the pan darkens or becomes mottled. If the mixture becomes dry add an additional tablespoon or two of oil. Remove from heat and allow the wok to cool. Discard the scallions and ginger.

3. Wash the wok with hot water using a soft sponge. Dry the wok over low heat for 1 to 2 minutes. The wok is seasoned and ready for cooking. I grew up in San Francisco surrounded, on the one hand, by the immigrant Chinese traditions of my family and relatives, and, on the other, by an innovative American culinary culture. My earliest memories of food are of the extraordinary meals my mother and father prepared for us (my brother and me) and of the efforts they made to ensure that we ate well. Their care was not only a matter of selecting the freshest ingredients, but also for the authenticity with which they replicated the traditional Cantonese dishes of their youth in China during the 1930s and forties.

This connection to the cooking of old-world China coupled with the discovery of Julia Child on television (and her “exotic” dishes) shaped my lifelong affair with food and cooking. At the age of thirteen I began an apprenticeship with Josephine Araldo, a French cooking teacher. Those lessons initiated an exploration of other cuisines and led me, eventually, to my career in food.

I spent much of my early professional life as the test kitchen director for over forty cookbooks published by Time Life Books. In the early nineties, after growing weary of producing what had become soulless work with formulaic recipes, I developed a yearning to reconnect to the tastes and foods of my childhood. Over the next few years, I made numerous trips back to San Francisco from my home in New York to cook with my 70-year old mother and 82-year old father. It took much cajoling and great persistence to convince them to teach me their recipes.

At the beginning, my focus was on a precise recording of the recipes. Eventually, and to my great surprise, as we cooked my parents, who had always been reticent about their past, began to share memories of their lives in China and accounts of their early days in America. This is how I came to learn a large part of my family’s history. What started as a little recipe project soon blossomed into a memoir cookbook, The Wisdom of the Chinese Kitchen, which was published by Simon & Schuster in 1999. The book was awarded the IACP Le Cordon Bleu Best International Cookbook Award, in addition to being a finalist for an IACP First Cookbook Award, and a James Beard World International Cookbook Award. It was also featured in a special segment on CBS Sunday Morning. Many of the relatives and friends who taught me their recipes and shared their stories have since passed away. The Wisdom of the Chinese Kitchen feels to me now almost like a treasured family album.

My second cookbook, The Breath of a Wok, grew out of the realization that most Chinese Americans know little about their own culinary traditions, specifically wok cooking. I had become aware also of how cooks in China were abandoning their classic, well-seasoned iron woks for inferior nonstick cookware. In a tribute to wok cookery and out of a desire to reignite its popularity, I partnered with Alan Richardson to create what the acclaimed food historian and author Betty Fussell described as, “a bridge between cultures for a Chinese-American in search of history and destiny. It is a remarkable collaboration between a writer and a photographer that reveals what the wok symbolizes—a craft, an art, a container of communal harmony and balance.” That book won the IACP Le Cordon Bleu Best International Cookbook Award, the Jane Grigson Award for Distinguished Scholarship, and the World Food Media Awards’ Best Food Book. It was also featured in the New York Times, on NPR’s All Things Considered and was selected as one of the best cookbooks of the year by Food & Wine, Fine Cooking, Bon Appétit, and Epicurious.

The Breath of a Wok led me to the adventure of traveling with my carbon-steel wok (in my hand-carry baggage) on a 25-city tour for the culinary retailer Sur la Table to teach the art of wok cooking. I published further articles on Chinese cooking in Gourmet, Bon Appétit, Eating Well, and Saveur, where I am a contributing editor. The book also brought me speaking engagements at the Culinary Institute at Greystone, China Institute, New York University Asian/Pacific/American Institute, the San Francisco Asian Art Museum, The French Culinary Institute, and the Chinese Historical Society of America.

In 2006 I began work on Stir-Frying to the Sky’s Edge. This effort was dedicated to the effort of empowering home cooks to stir-fry with confidence. It explores everything from the origins and health benefits of stir-frying to the technique’s great economy of time and fuel. I was awarded an IACP Culinary Trust eGullet Society for Culinary Arts & Letters Culinary Journalist Independent Study Scholarship which funded my research travel to Trinidad, Germany, Holland, Canada, and the United States to study the stir-fries of the Chinese diaspora.

While Stir-Frying to the Sky’s Edge concentrates on traditional stir-fries, it is also filled with remarkable stories of how this simple, beloved cooking technique has enabled generations of Chinese around the world to eat well and with exquisite economy. My interview subjects include Chinese who grew up in such far-flung locations as Peru, Jamaica, Burma, Malaysia, Singapore, Taiwan, Vietnam, Macau, India, Indonesia, South Africa, and the Mississippi Delta.