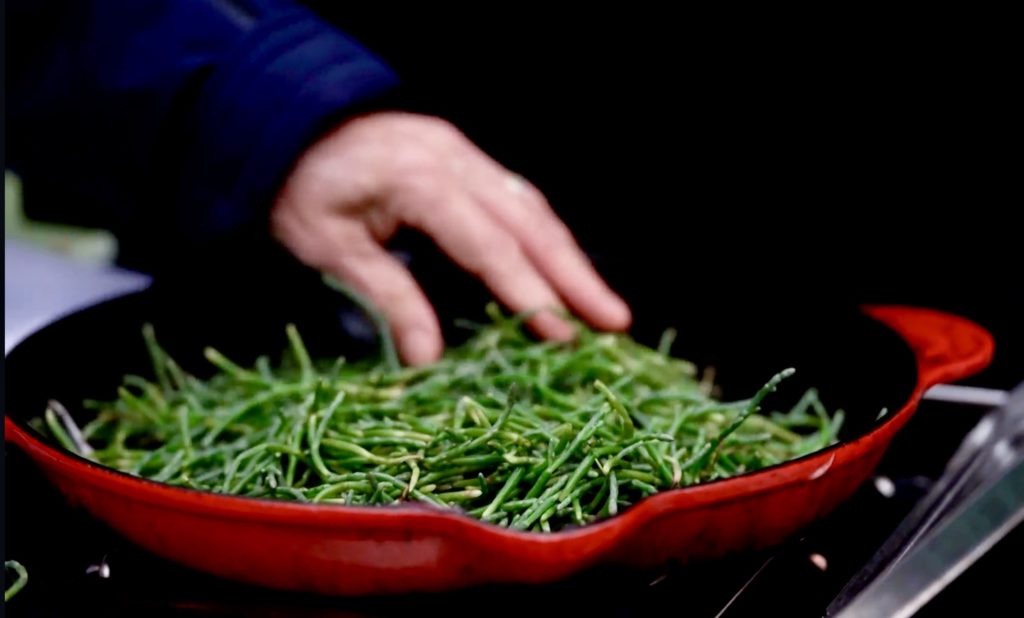 Note:
Various species of sea asparagus grow around the globe A succulent – its pea-green segments are plump with salt water – and it has a crisp texture and salty taste.  If you want to tone down it’s salinity you can either soak it in cold water before serving raw or blanch it in boiling water before cooking.

On the East Coast, it’s most often called samphire greens or beach asparagus, but it’s also known as sea beans, glasswort, crow’s foot greens and many other regional names.

If you can’t find sea asparagus (it has a short season), you can substitute regular pencil thin asparagus, trimmed and cut into 2-inch lengths.

2 pounds sea asparagus
4 slices bacon (note: we only used 2 slices but if you are substituting regular asparagus, use all 4 slices)
1 large red onion, halved and thinly sliced
2 tablespoons balsamic vinegar

Before you cook the sea asparagus, run it under cold water to remove any sand, dirt, or debris. If you see any reddish stems, cut them off—they contain a tough thread that’s difficult to eat. Also, remove any spots that seem tough or wilted.

In a 12-inch skillet cook the bacon over medium heat until it is crisp. Transfer to paper towels to drain; pour off all but 1 tablespoon fat and reserve the rest. Add the onion to the skillet cook over medium heat, stirring occasionally until the onion softens and starts to brown.  Transfer the onion to a bowl and toss with the vinegar. Add the reserved bacon fat and the sea asparagus to the skillet and saute for several minutes or until just tender. Transfer to a platter and top with the bacon, crumbled, and the onion.