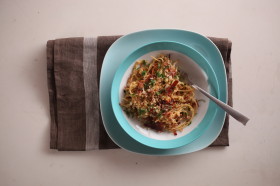 This is the best kind of breakfast-for-dinner dish.  Not only does it include bacon, eggs, and toast (in the form of buttery crumbs), it features spaghetti, too.  And, with the exception of the bacon, most of the entree is made in one skillet.

Let’s start with the bacon.  I prefer to cook mine in the oven on a rack set on a rimmed sheet pan rather than sauteeing it in a skillet.  The bacon cooks more evenly in the oven, doesn’t curl up the way it does in a skillet, and won’t make a greasy mess of your stovetop.

While the bacon is in the oven, you can sauté the bread crumbs, followed by the onion and the spaghetti, all of it in the same skillet.  (Toasting the spaghetti in the skillet before adding the liquid gives it another layer of flavor.)

Try this dish on a weeknight after a bad day at school or on the job.  I guarantee it’ll cheer you up.

Arrange the bacon on a rack on a rimmed sheet pan and bake it on the middle shelf of the oven until it is crispy, about 25 minutes. Remove from the oven, let cool and crumble.

While the bacon is cooking, heat 3 tablespoons of the butter in a large nonstick or stick resistant pan over medium heat, add the bread crumbs and cook, stirring constantly, until they are golden and crisp, about 10 minutes.

Transfer the crumbs to a bowl and toss with a hefty pinch each of salt and pepper and set aside. Wipe out the skillet.

Add the remaining 2 tablespoons butter to the skillet and the onion and cook over medium heat, stirring occasionally, until golden, about 15minutes. Transfer to a bowl and set aside. Add the pasta to the skillet and cook over medium heat, stirring often, until light golden, about 8 minutes. Add the stock, 1 1/2 cups water and 1/2 teaspoon salt. Bring to a boil and cook at a vigorous simmer, stirring often, until the pasta is tender, about 12 minutes.

Make a well in the center of the skillet, add the eggs and cook over medium low heat, stirring constantly, until the eggs are just set. Remove from the heat, return the onions and one half of the crumbs and toss well. Add salt and pepper to taste, divide among 6 plates and top each portion with one sixth of the remaining crumbs and the bacon. Serve right away.

5 Responses to Spaghetti with Bacon, Eggs and Toasted Crumbs