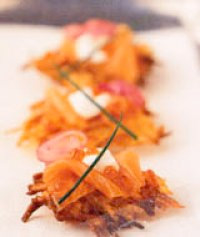 I often make these appetizer latkes from Sara Moulton Cooks at Home for special occasions when it’s just the four of us at home, because you can dress them up or down. Sam leaves the salmon and caviar alone in favor of the unadorned potato pancakes. Ruth also favors the pancakes but adds a shmeer of sour cream to hers. Bill and I load them up with the works.

Assuming you also want the works, you’ll appreciate the way that the crisp and salty potato pancakes complement the richness of the salmon and caviar. (The pancakes should be almost as thin as potato chips. To get them that thin, spread them out in the nonstick pan and press them down.) For more Holiday recipes, take a look at my Holiday Recipe Collection.

Makes about 12 pancakes, serving 4
Ingredients:
1 large baking potato
2 tablespoons unsalted butter
2 tablespoons vegetable oil
Kosher salt to taste
1/2 cup crème fraiche
1 tablespoon fresh lemon juice
1 tablespoon grated fresh or drained bottled horseradish
Freshly ground black pepper to taste
2 ounces smoked salmon, julienned
1 tablespoon caviar or salmon roe
1/2 cup Pickled Red Onions (recipe follows)
Peel and coarsely grate the potato. Working in batches, heat 2 teaspoons of the butter with 2 teaspoons of the vegetable oil in a large nonstick skillet over medium high heat until very hot.Sprinkle 2 tablespoons of the potatoes into the pan, pressing into a 3-inch diameter with a spatula to create lacy, flat rounds of potato. Don’t be concerned if you can see the bottom of the pan through gaps in the potatoes. Cook until well browned, pressing down firmly, 5 to 7 minutes per side. Season with salt while hot. (The cakes can be made several hours in advance and crisped in a hot oven before serving.)
Combine the crème fraiche, lemon juice, and horseradish in a small bowl and season with salt and pepper. Arrange 3 pancakes per serving on small plates.Top the pancakes with equal amounts of smoked salmon, a spoonful of horseradish cream, and a spoonful of caviar. Top with a few pickled onions and serve.
Pickled Red Onions: Combine 2 medium red onions, sliced 1/4 inch thick, 1 1/2 cups cider vinegar, 2 garlic cloves, peeled and halved, 3 tablespoons sugar, 1 tablespoon pickling spice, and 1 1/2 teaspoons kosher salt in a small saucepan; Bring to a boil over high heat. Reduce the heat to medium and simmer for 2 minutes. Remove from heat and cool to room temperature before serving. Chop fine. Makes about 2 cups.