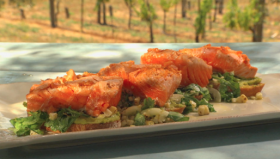 Suggested Accompaniment
Serve with a Chardonnay

Directions
Grill or pan-roast the salmon to desired doneness. Meanwhile, prepare the Sweet Pea Hummus and Crostini and grill the corn. Toss the corn, arugula and cucumber together in a bowl with the vinegar, olive oil and salt and pepper to taste.

Spread a large spoonful of the Sweet Pea Hummus on a piece of the grilled bread and place in the center of each plate. Top with a handful of the salad and then place the salmon on top and serve.

Directions
In a food processor puree everything together and season to taste with salt and fresh ground black pepper.

Crostini
Ingredients
4 1/4”-thick slices of Ciabatta bread brushed with olive oil and seasoned with salt and pepper
Grill or toast the bread until lightly browned.

Cook’s Notes
When cutting corn off the the cob, lay the ear of corn flat on the counter and cut the kernels off the sides. This is so much less precarious than standing the ear on its stem end and cutting the kernels down and off the cob. And the kernels won’t fly off and on to the floor.

Joey blanches peas (boils them for a few minutes in salted water) and them immediately drains them, spreads them out in one layer in a flat pan and chills them in the fridge. He does this instead of transferring the cooked peas to a bowl of ice and water to cool (the thing we were all taught to do in cooking school) which he thinks makes the peas taste watery.