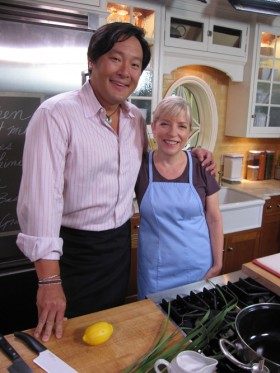 The best chefs know that beans can round out a meal with extra flavor and texture, and today we have two of the best chefs! Joey Campanaro of New York’s Little Owl makes an amazing Salad Dressing Chicken with Escarole and Bean Salad on the side, and chef Ming Tsai joins his old buddy Sara to make Scallops with Black Beans and Zucchini. We’ll take to the woods to search for edible wild plants with a professional forager, Tama Matsuoka Wong, who sells her finds to New York’s top chefs.

Scallops with Black Beans and Zucchini

For more information about her passion and her business check out her website:

Joey Campanaro’s love for cooking started from time he spent in the kitchen with his family. After studying restaurant management and soaking up Europe’s cuisine and culture, Joey returned to the states to work in kitchens across the country, winding up at the helm of The Harrison in 2001. Since then, Joey opened his first restaurant, The Little Owl, and next collaborated with Mike Price to open Market Table.

Ming’s love of cooking was forged in his early years. Ming was raised in Dayton, Ohio, where he spent hours cooking alongside his mother and father at Mandarin Kitchen, the family-owned restaurant. His experience also taught him about restaurant operations and the art of making customers happy.

Ming headed east to attend school at Phillips Academy Andover. From there, Ming continued to Yale University, earning his degree in Mechanical Engineering. During this time, Ming spent his summers attending Le Cordon Bleucooking school and apprenticing at area restaurants in Paris. After graduating from Yale, Ming moved to Paris and trained under renowned Pastry Chef Pierre Herme and then on to Osaka with Sushi Master Kobayashi.

Upon his return to the United States, Ming enrolled in graduate school at CornellUniversity, earning a Master’s degree in Hotel Administration and Hospitality Marketing.

In 1998, Ming opened Blue Ginger in Wellesley, MA and immediately impressed diners from Boston and beyond with the restaurant’s innovative East-West cuisine. In its first year, Blue Ginger received 3 stars from the Boston Globe, was named “Best New Restaurant” by Boston Magazine, and was nominated by the James Beard Foundation as “Best New Restaurant 1998”. That same year,  Esquire Magazine honored Ming as “Chef of the Year”. The James Beard Foundation crowned Ming “2002 Best Chef Northeast” and, since 2002, the Zagat Restaurant Guide has rated Blue Ginger within the “Top 5 of Most Popular Boston Restaurants”. In 2007, Blue Ginger received the Ivy Award from Restaurants & Institutions for its achievement of the highest standards in food, hospitality and service. In 2009, Ming and Blue Ginger won IFMA’s Silver Plate Awardin the Independent Restaurant category recognizing overall excellence in the country. Most recently in November 2012, Boston Magazine ranked Blue Ginger as one of The 50 Best Restaurants. Blue Ginger closed in June of 2017.

In early 2013, Ming opened his second restaurant Blue Dragon – an Asian gastro pub located in the Four Point Channel area of Boston. The tapas-style menu features Ming’s East-West approach but now takes a twist on traditional pub favorites. Blue Dragon was named one of Esquire Magazine’s “Best New Restaurants 2013” and one of Zagat’s “24 new restaurants you need to know about around the US“.