I had never been to Turkey before this episode and what a shame I waited so long! Istanbul is quite beautiful; everywhere you look you see mosques and minarets. The city is surrounded by water with the Sea of Marmara to the south, the Bosphorous running through the middle of the city and the Black sea to the north. It is a fascinating mix of the old and the new, straddling the continents of both Europe and Asia.

And for the foodie, this is paradise. I have never seen such markets, filled with pristine produce, dried fruits, nuts, pickles, olives, charcuterie, cheeses and above all spices. In this episode I visit several markets with an extremely knowledgable food and cultural historian, Aylin Oney Tan. Then I take a trip to the west of Turkey to the Aegean to visit Hande Bozdogan who runs a farm, right on the water, to supply produce for her cooking school in Istanbul. We make pumpkin fritters, quince liqueur and simit (cracked wheat) and lamb kebabs.

Finally I visit one of the oldest neighborhoods in Istanbul, Kuzguncuk, to cook with Refika Birgul, a Turkish chef with her own tv show. We buy fresh bluefish from a fisherman off the dock and dough from a local bakery and then head back to her studio to prepare marinated bluefish, walnut poppyseed bread and a sauteed beef dish with tomato sauce and thyme yoghurt.

What markets did I visit with my guide Aylin Oney Tan? A pottery shop in the spice market Nuts and dried fruits at the spice market

It is one of the largest markets in the city, located in Fatih, in the neighborhood of Eminou. The Spice Bazaar is an “L”-shaped building, consisting of 88 vaulted rooms, almost all of which are now divided into an upper and lower story. Monumental gateways are at the ends of both halls, with chambers above each entrance way. The main entrance is in the southwest corner, facing the Yeni Mosque. Aylin and I visit shops where the local foodies go. This is where I found:

THE SPICE STORE IN THE SPICE BAZAAR– UCUZCULAR 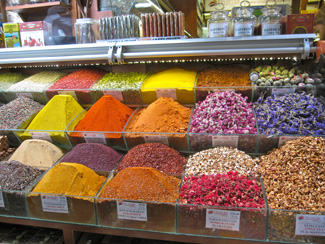 Just some of the may spices sold at Ucuzcular Me with the young owner of the store, Bilge Kadioglu

#51 in the spice market. The owner is a young woman Bilge, who stocks a colossal range of herbs and spices, along with Iranian saffrons, teas, essential oils, and rose water. The store also makes their own innovative spice blends, including an Ottaman Spice Mix (saffron, red chili flakes, marjoram and thyme) and Janissary Spice Mix (farm-grown sweet red peppers, sumac and oregano).

Aylin introduced me to some of the rare spices sold in the store – pulverized wild cherry kernals, used in sweet and savoury baking, which have an almond flavor, and saf yerli sahlep, the root of wild orchid, used in Turkish ice cream.

CHICKEN PUDDING – TAVUK GOGSU
We bought the chicken pudding on our way to the ferry at one of Istanbul’s most popular pudding shops, Saray. Kadikoy market as seen from the roof of the coffee shop

This is the huge street market that Aylin and I visited after taking a boat to the Asian side of Istanbul. This is where the locals shop. There are no tourist trinkets and souvenirs in the shops, in fact there are very few tourists at all. You could spend hours browsing the outdoor stalls, admiring the beautiful produce of the fruit and vegetable vendors, fishmongers and butchers and visiting the specialty shops.

Everyone comes here to pick up their ground coffee. We were given a little demo about how to make Turkish coffee. Me at the pickle shop, Meshur Ozcan Tursulari, with the owner and my guide, Aylin Oney Tan

Every vegetable that can be pickled is pickled at this store, and then you can drink the juice as well, which we did. It is very refreshing! They also sell verjus, vinegars, pastes, sauces and olives, and an excellent pomegranate molasses. Me with the chef/owner, Musa Dagdeviren

We finished our shopping day with some tastes at this popular Kadikoy restaurant. She has studied architecture and conservation of historic structures in Turkey, Italy and the UK. She had her own practice on architectural conservation for 15 years, restoring various historic monuments in the country. Her restoration of Imperial Mint Building in the complex of Topkapı Palace received The Award of Union of Architects in 1996, and her previous work in Milet, İlyas Bey Mosque, received Europa Nostra Award in 2012.

In parallel to her successful career in architecture and conservation, she has been conducting her researches on food history. Eventually her passion for food and travel led her to write on food. Since 2003 she holds a weekly food column at Cumhuriyet, a prestigious national daily. She contributes to various food magazines and attends national & international symposiums on food studies. She has been a Jury member of the Slow Food Award 2000-2003, her nominees receiving awards, and was a Terra Madre delegate in Torino in 2010. She contributes to Terra Madre and Presidia projects as the founder and leader of the Ankara, Turkey Slow Food Convivium.

She gave consultancy to Channel 4 documentary enacting the funeral dinner of King Midas and appeared in the Istanbul episode of the ‘Diaries of a Foodie’ (broadcasted also as ‘Food Lover’s Guide to the Planet” of Gourmet Magazine for National Geographic Channel.

She is a regular presenter at the Oxford Symposium for Food & Cookery and won the prestigious Sophie Coe award on Food History in 2008 by her article “Poppy: Potent yet Frail” presented previously presented at the symposium.

She has worked as curator for the Antalya City Museum, Culinary Culture Section, a project suspended for the time being. She also worked for Princess’ Islands City Museum in Istanbul, again as the curator for the culinary section and events organization.

She contributed to ‘The Encyclopedia of Food Cultures of the World’ published by Berg Publications, by writing the entry for Turkey. She recently contributed to “The Encyclopedia of Street Food”, writing the entry for Turkey and Hungary, due to appear from the same publisher in 2014. She’s currently working on her book on History of Turkish Cuisine for Reaktion Publications, UK, due to appear 2014. In 2012, she presented a paper on Sephardic food history in FOST, Social & Food Studies, Vrije Universiteit Brussel. Her work on regional cuisine of Gaziantep, “A Taste of Sun and Fire” has appeared in June, 2012, and another one, Little Book of Turkish Coffee is due to appear in October, 2012.

She leads culinary walks for Context Travel and has been listed in Travel & Leisure, World’s Top Culinary Guides’, June 2011. Being in the tightly knit community of food writers, columnists and chefs in Turkey, she has helped food writers and researchers visiting Turkey, including Harry West of SOAS on his study of European Cheeses, and chefs like Sam Clarke of Moro in London, James Beard award winner food writer Fuchsia Dunlop, Australian Masterchef Judge Matt Preston and reporters for Delicious Magazine and BBC Radio 4, among various others in their visits to various regions of Turkey.